Personally I’m more of a cruising fan than a speed freak, whenever I’ve been passenger on a speed boat up on plane, I’ve always been slightly nervous throughout the whole experience. It’s not that I haven’t trusted the person at the helm, but just that flying along at 40 knots feels a whole lot faster when:

Now whilst there’s not a lot you can do about the first two points besides buying a bigger boat or not going out on the water in the first place, to me the third is much harder to dismiss, after all it’s mandatory to wear seatbelts when driving any type of road vehicle, and during take off and landing in an aircraft, so why are boats exempt?

The short answer is because it’s safer. Whilst this might seem counterintuitive at first, when you think it over a bit more it soon becomes clear why this is the case. Quite simply you’re more likely to drown if your boat crashes or overturns and you’re wearing a seat belt or harness.

If you find yourself in the water there’s a good chance you will panic or go into a state of shock, greatly reducing the odds that  you will be able to undo your restraint, even if physically you’re not injured.

Granted the risk of injury or even death as a result of being thrown from your boat certainly exists, it’s just that this risk is considered justified because it’s less likely than death by drowning.

Not a particularly satisfying reality, but reality nonetheless!

If there is a boating equivalent to wearing a seat belt then it would almost certainly be the need to wear a lifejacket correctly.

Wearing a Lifejacket is Non Negotiable

Whilst a life jacket/life vest won’t protect you from impact it will protect you from drowning, which as we know is the greatest risk associated with a boat crashes. Lifejackets are specially designed to ensure you float upright with your head above the water, so they can certainly save your life even if you’re unconscious or unable to swim.

Just as with seatbelts it’s important to ensure you wear your life jacket correctly, or else it could prove to be either completely ineffective or even more dangerous than not wearing it at all. A particular pet peeve of mine is when I see people wearing their life jacket without the crotch strap done up. Without this vital fastening in place a lifejacket will simply float to the surface above the head of person wearing it. The crotch strap keeps the lifejacket pulled down to the correct height and ensures it stays with the wearer when floating in water.

Now we know that seat belts aren’t the answer to staying safe on the water let’s look at what can be done to avoid injuries where you might not be thrown from the boat but might still suffer from injuries.

You’ll notice most commercially produced boats contain grab handles throughout their accommodation spaces including the helm area. When things get rough don’t be shy about holding onto these, and if you don’t think your boat has sufficient grab handles, go ahead and install some!

RIBS and other fast boats tend to be fitted with shock mitigating ‘jocky’ seats with grab handles on top of the back rests for the person sitting behind to hold onto when things get choppy, whilst the person at the front needs a handle fitted to the helm to hold onto

I’ve heard many a tale of people banging their heads, shoulders, and arms against various hard points on their boat in the event of an emergency deceleration, and whilst it could be argued that proper handling of a boat should render such events extremely unlikely, that doesn’t mean the unexpected cannot happen.

One solution is to place padding over high risk areas, particularly if they have been known to cause injury previously. How professional or crudely you do this is up to you, but I’ve worked with several high quality upholsterers over the years who do a fantastic job a creating custom covers and cushions, so the option is there to make something that looks like it was ‘supposed’ to be there if you so wish.

I touched on the benefits of shock mitigating seats above, but as the name suggests such seats have a damper in the base to counteract any severe shocks you encounter going over the waves at speed.

There are two basic designs available, either standard seats or jockey seats. Generally speaking jockey seats are suited to RIBs and open canopy boats where you have the benefit of standing over the seat when travelling at speed, while boats with an enclosed cockpit are better suited to a traditional seat design. Both options however can benefit from shock mitigation which either comes in the form of a hydraulic damper, or a hydraulic damper in combination with a spring much like that found in a car shock absorber.

If you’re going to be travelling at speed whilst in a sitting position shock mitigating seats are an absolute must, not just because they make for a more comfortable ride but because they are necessary to prevent injury. To illustrate how serious the impact of a slam impact can be on the human body without shock mitigation look no further than a company I used to work for (I won’t name names!)  who neglected to fit a shock seat to a boat designed to travel at speed. Sure enough not only was a customer injured, they actually suffered a broken back as a result.

Driving at a Sensible Speed and Reading The Sea

There’s only so much that technology can do to help if you’re at the controls of a potential death machine like a high powered boat. In the end the skill and good sense of the person at the helm is what will determine whether or not the boat is involved in any unfavourable encounters. Experience counts for everything when out on the water, and being able to plan two steps ahead at all times will ensure you don’t have to make any sudden moves.

Do Boats Ever Have Seat Belts?

The argument for seat belts isn’t completely ridiculous, and there are certain instances where they are used, and for good reason, such as highly tuned racing boats that travel at such high speeds that they are prone to flipping over.

I have to say I can’t quite see why a manufacturer hasn’t developed a seat belt that supports against the wearer being thrown from the boat, yet detaching in the event of capsizing in much the same way as the hydrostatic release of a liferaft. The technical basis for such a device clearly exists, so I can only assume the demand isn’t there from customers. Would you have such a system installed if it existed? 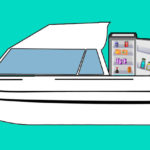 Propane fueled refrigerators are certainly less common than electrical refrigerators on boats, but if installed correctly (typically in a gimbal mount to keep them level and the correct venting arrangement for leaking gas) they are a highly effective means of refrigeration, although they aren’t without the potential to suffer faults from time to time… Whilst […] 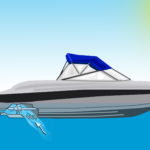 Off the top of my head there are 3 ways of propelling a boat, either through the use of a conventional propeller, an impeller (or ‘jet drive’), and aircraft style propellers typically found on flat bottomed air boats used in marshlands where below waterline propulsion is impractical. For most of us the choice will come […]