Buying a used boat is of course a great way to get into the activity without making a massive financial commitment. Whether you’re selling a boat or buying one, it’s worth knowing what will affect the price you can buy/sell it for.

By far the most contentious and most widely discussed issue around the subject of second hand boats is ‘engine hours’. More often than not a greater number hours clocked up by an engine is considered less desirable than fewer hours, and for the most part this is completely correct. As ever with contentious subjects though, there’s usually a little more to it than that.

A boat that has done a lot of hours is proof of one thing at least: it’s been pretty damn reliable up until now. There’s also a good chance it has stayed reliable for as long as it has because it has been well looked after in the process. You’ll probably be able to get a fairly good idea just by looking at the boat if it’s been cared for or not.

Of course it’s never good to assume and you’ll want to get as much information from the seller about this as you possibly can, but at the very least keep this in mind before you write off a potentially great boat just because it has done a lot of hours.

Conversely you could just as easily come across a weather beaten, lichen covered wreck that has spent most of its life sat on the driveway of the current owner. Whilst on paper this is technically the superior vessel because it has done fewer hours, the engine could easily be in a poorer state than one that has been well cared for, even though it has done more hours.

Problems with a long since dormant engine and boat could be:

With The Engine and Auxiliary Systems:

… And The Hours on The Engine Might be The Least of Your Concerns:

So from this it quickly becomes apparent that excessive engine hours might not be the best deciding factor over whether you choose to buy a boat or not.

Sure, overhauling an engine that’s done 2500 hours might not be a low cost undertaking, but I’ll bet that rectifying a lot of the above vessel issues wouldn’t be cheap either.

Can the Hour Meter Be Trusted?

Newer engines are likely to be more expensive than older ones, but there is something to be said for them as far as logging hours goes. Most will have a control module that logs the number of hours the engine has done, giving you an honest, accurate figure.

Older engines and even some more basic modern engines do not have this feature, and instead rely on an external hour meter gauge. The trouble is that this gauge can easily be swapped out for a replacement, and if this happens you won’t get a true indication of the total number of hours worked by the engine.

Low Hours Could be a Sign of Unfavorable Providence

If, for example, you’re not prepared for the overhaul or maintenance required by a boat that’s been used in a saltwater environment (if you’re very much a fresh water boater) then you might think twice before buying a boat that has done very few hours in a saltwater environment. This might especially be the case if said boat has been imported to your location having not sold where it came from originally.

The trouble is this might not be immediately obvious to you.

So if the deal seems too good to be true, it might be worth asking the question about where the boat has come from. That’s not to say there will inherently be anything wrong with it, but just that there might be some other information pertinent to your decision to buy the boat or not.

How Can I Tell That a Boat Engine Has Been Well Looked After?

So we’ve established that simply knowing how many hours an engine has done does not in itself tell us much about whether an engine will be a source of grief or not, but beyond asking to see the engine service history (if there even is one) and taking the current owner’s word for it when they say their boat is as good as gold, it pays to be able to do a little of your own investigation just to be sure.

Whilst you probably can’t hope to get stuck in and start poking around too much, there are a few simple visual checks you can make to get some idea of the overall state of things: 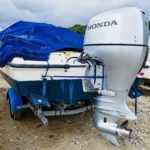 Without a doubt outboard motors are the most ingenious means of propulsion for boats; they’re a fully self contained power plant, they come in a range of different sizes, and they’re convenient to maintain and transport. However in some ways their supreme utility can be a curse as much as it is a blessing. People […]